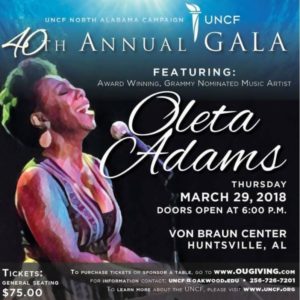 Grammy-nominated vocal recording artist Oleta Adams will be the special guest performer at the 40th Annual UNCF (United Negro College Fund) Gala on Thursday, March 29 at 6:30 p.m. The Gala will be held in the North Hall of the Von Braun Center.
Since the success of her debut album “Circle of One,” Oleta Adams has inspired fans around the world with songs that draw from her roots in gospel. Crossing effortlessly into the realms of soul, R&B, urban, and popular music, her success was first nurtured by worldwide tours with Tears for Fears, Phil Collins, Michael Bolton and Luther Vandross, and was solidified by four Grammy nominations with more than two and a half millions of records sold.
Through the years she has recorded duets with Al Jarreau, David Sanborn, Shirley Ceasar and the famous songs she recorded with Tears for Fears. Oleta released her ninth album, THIRD SET, in 2017.
The UNCF is the nation’s largest and most effective minority education organization. UNCF provides operating funds for 37-member historically black colleges and universities (HBCUs), scholarships and internships for students at about 900 institutions, and professional training for faculty and administrative staff. “We thank the community for continuing to partner with us. Support of the UNCF helps us equip our students to graduate and become national and global servant leaders,” said Cheri Wilson, Executive Director of Advancement and Development at Oakwood University.
As the only North Alabama UNCF member institution, Oakwood University is grateful and proud to contribute to the concerted effort of raising funds for the mission of the UNCF. Each year, Oakwood hosts the UNCF North Alabama Campaign culminating with the Annual UNCF Gala held on the Thursday evening of its Alumni Weekend.
For more information about the Gala, sponsorship or to purchase tickets, visit www.ougiving.com or contact Cheri Wilson at (256) 726-7201 or email uncf@oakwood.edu. 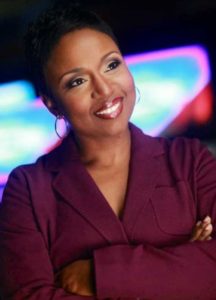 The evening’s emcee will be Kym Richardson Anderson, ’93, an award-winning journalist and a proud alumna of Oakwood University. Kym is the main anchor at the NBC affiliate in Mobile, Alabama, WPMI-TV, which recently won the Alabama Associated Press award for best newscast in the state. She is a member of Delta Sigma Theta Sorority, Inc.
February 14, 2018
SHARE