Artist of the Month – Stephen Manders 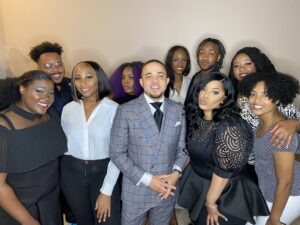 Stephen Manders, Born in Florida, raised in Bermuda, came to Oakwood University in 2007. While at Oakwood he studied Public Relations and received his Bachelors of Arts Degree in 2012.

Stephen currently serves as the Assistant Minister of Music for the Oakwood University Church under the direction of Dr. Carlton P. Byrd and Musical Director for New Life Baptist church, Pastor Antoyne L. Green. He has also served as Music Director for various conferences such as the Spring into Praise Music Conference 2018 and the Bermuda Festival of Hymns 2020.

Stephen’s song Under His Wings, was published with GIA Publications 2015, and he has also produced music for artists such as James Fortune (Album: ‘Dear Future Me’ Song: ‘You Still Love Me [Interlude]).

He and his current group Stephen Manders & Decree have released three singles; ‘Be Still’ feat. Naomi Parchment, ‘Adoration’ which has reached over one million viewers via platforms such as BET and The Shade Room, and his most recent Single, ‘Heaven’.

Stephen’s mission in life is to write music that brings Glory to God and touches lives Globally.