That is until somebody sees that normal thing through fresh eyes.

Every sabbath we took the same rout at around the same time and we saw the same man.  He was homeless and for me his homelessness was normal.

So I avoided eye contact, kept doors locked and only cracked the window enough to pass thru a just enough coin to absolve me of guilt while I worshipped.

For me he was just an adjective. A  homeless man.  But my son had fresh eyes.  And to him he was a person with a name.  A name we later found out was Tom.

One day my son asked an honest question. He said

“Dad we are having a meal a church today right. “

“What happens to the food when we are done”

“We throw it away”

“How can we throw food away when that guy goes hungry?”  Silence!  Cutting question. A question you ask when you don’t allow homelessness to become normal.

And so ever since then he makes sure we have a gift in the car for him. And this Christmas insisted that we put together a special gift not for a homeless man but for a man named Tom.

Maybe just maybe the normal situations around us are waiting for us to approach with them with Fresh eyes.  And the adjectives we have attached to others are waiting to be replaced with names. 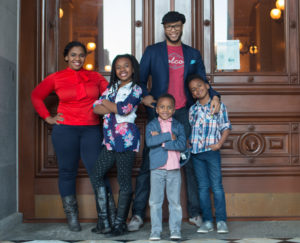