Johnnie Loujean Dent was the oldest child and only girl born to the late Mattie Lee and John Dent. She was born March 25, 1907, in Birmingham, Alabama. She had two brothers, 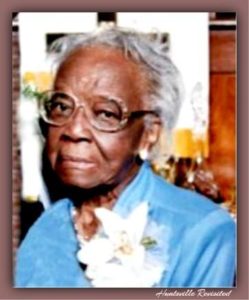 James Woodrow Buddy and Thomas Lee Shorty , both of whom preceded her in death. After graduating from high school at the age of 16, she attended Tuskegee’s John A. Andrew Memorial Training School for Nurses. She received her degree in nursing in 1930. After graduation, she worked in south Alabama and furthered her training at Case Western Reserve. She worked briefly in Washington, D.C. and returned to Alabama as a Public Health Care Nurse with the Alabama State Department of Health. She initially came to the Huntsville area circa 1943 to help with an outbreak of Tuberculosis. In 1946, she was hired by the Madison County Health Department to improve the training of local midwives. Shortly thereafter she and Dr. Harold F. Drake organized the Triana, Alabama Clinic to provide health care for expectant Negro mothers and children, many of whom, until then, did not have access to health care. Jean Dent s unique display of her love for those committed to her care and charismatic approach for getting things done were exemplified in her work. She trained more than 60 lay midwives including teaching them to read and write their names and properly fill out the birth certificates. She also enjoyed providing an annual Christmas Party for the children at the Triana Health Clinic complete with gifts and special treats. During the 1970s, Nurse Dent , as she was known, began to receive recognition for her untiring efforts in the Huntsville and Madison County Communities. A few of her honors include the following: Nurse placed the first child in the Harris Home for Children and was extremely supportive of its mission. 1973 Madison County Nurse of the Year Alabama State Nurse Association Nurse of the Year Nurse was the first African-American nurse to receive the award in Madison County and the State of Alabama. 1976 Outstanding Service to Humanity Big Sister Organization 1980 Twenty Years as Treasurer (1960-1980) Tuskegee National Alumni Association 1986 Frederick S. Wolf Award for Professionalism in the Advancement of Public Health in Alabama 1990 Sixty Years of Community Service Community Action Agency, Huntsville City, Madison and Limestone Counties In the late 1990s, she also received numerous Certificates of Appreciation and State of Alabama Resolutions attesting to her determined pursuit of excellence in Public Health Care.